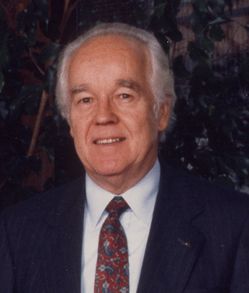 The engineering community lost a key leader on November 24, 2014 with the passing of Harl Aldrich, Jr., PE, Ph.D.

To share a memory or offer a condolence visit: www.concordfuneral.com
See more

Harl Aldrich was a Founder and Chairman Emeritus of Haley & Aldrich, Inc. of Boston, and a nationally recognized leader in the field of geotechnical engineering.

The Aldrich Center is the first floor meeting facilities of The Engineering Center. Used for educational meetings and social events, the center is open for both engineering association and public functions.

With permssion of BSCES, here are excerpts of a profile on Harl Aldrich that ran in the BSCES news in the past.

The name of Harl Aldrich is one that is likely familiar to many in the engineering realm in Boston. What is most certainly less well known is that the name attached to his middle initial of P uncovers an intriguing connection to a prominent American iconic figure of the 20th century... which will be revealed at the end of this article.

At the conclusion of his career, Harl Aldrich Jr. had contributed more than 35 years of his experience to the development of the professional field of geotechnical engineering in New England, in addition to spending several years as a faculty member in the Civil and Sanitary Engineering department at the Massachusetts Institute of Technology (MIT). His passion for learning and the academic side of the field was developed early on, when he decided as a teen that he wanted to pursue an interest in civil engineering. Harl studied at the University of Idaho and MIT, which were interspersed by a stint in the US Navy, culminating in the awarding of his Sc.D. in 1951.

As an engineering professional in the consulting business, Harl began his career by founding the company of Haley & Aldrich with James F. Haley on January 1, 1957, representing the first firm in New England devoted to the field of geotechnical engineering. From the beginning, Harl says, he made a concerted effort to encourage and support employees of the company to participate in community service, professional societies, and other outside activities. For his own part, Harl led by example, starting in his student days at MIT, where he was a student member of ASCE. After graduating, he joined as a member of ASCE and the Massachusetts Section of the society and in 1964 and 1968–69 served as the President of the Massachusetts and Boston Sections, respectively. The aspect of participation in professional societies was one that he felt especially strongly about because of the chance it represents to meet others in the profession and prospective clients.

In 1967, Harl initiated the professional development program at Haley & Aldrich, which set aside a certain percentage of the company income towards professional development activities for the staff, including opportunities to take courses and participate in society meetings. For Harl, it was important that the staff of the company, in addition to learning about the professional practice, was also encouraged to further their careers and education by participating in activities outside the company, enhancing their skills, taking special courses or classes, or working towards an advanced degree.

With Haley & Aldrich, Harl was also an active participant in the founding and activities of ASFE, The Geoprofessional Business Association, including working with other members to lead development of peer review program. Haley & Aldrich has the distinction of being the first firm to be peer reviewed under the ASFE program, which Harl notes was a very positive experience for both the firm and the profession in bringing together its participants and providing an opportunity to improve the quality of the profession, especially in the area of loss prevention. As a continuation of these efforts, Harl also served on the board of directors and as the President of TERRA insurance company.

Harl has been justly recognized for all these efforts through his election to the National Academy of Engineering and as a Distinguished Member of National Society of ASCE. In 2004, he experienced the highlight of his career when he attended the ASCE gala dinner in Washington DC to receive the OPAL award for management.   In addition to his myriad of contributions to geotechnical engineering, Harl has also actively participated in activities as an MIT alumnus and a member of the community in Concord, MA. His involvement at MIT included election to the position of President of the alumni association as well as serving as a member of the MIT Corporation and its executive committee. He says that giving back to MIT was something he felt was especially important in part due to its contribution to the growth and eventual success of Haley & Aldrich in the fledgling stage of its development. “My motivation [has always been] to give back,” Harl said. “I feel that there is a responsibility to give back to the profession, communities, and church.” \ Harl has lived in Concord since moving out of the married student housing at MIT in 1952. As part of the community in Concord, Harl first participated in public works commission in order to, as he states, “find out more about the practical aspects of living, [such as] sewers, public water supply, and water treatment,” and eventually ascended to the position of chairman.   Around four years ago, he and his wife moved to an independent living facility, where Harl has not slowed in the slightest, becoming involved in activities there as the President of the residents association and the chairman of a task force for new building construction, which was responsible for reviewing design specifications of new facility and participating in meetings with the architect and contractor, apropos activities for a retired geotechnical engineer.   Now on to that American icon connection... Harl’s love of learning and research took a slightly different tack after his retirement from Haley & Aldrich, evincing itself as an interest in genealogy that led him to some very interesting twists and turns of family history, from their initial venture to American soil in 1632 and spreading to practically all corners of the country. One vestige of his ancestry is represented by his middle name of Preslar, which is attributed to a German ancestor... one branch from whom moved south and changed their name to Presley. The rest, as they say, is history.